Sad news today that actress Carrie Fisher has died.  She suffered a heat attack on a her way back from filming in England.  Although she was said to be in stable condition yesterday she died this morning at UCLA Medical Center in Los Angeles.   Carrie Fisher was the daughter of two famous parents, Debbie Reynolds and Eddie Fisher and worked in Hollywood most of her life.  She is best known for playing the character Princess Leia in the Star Wars films.  She performed other memorable roles in other films including The Blue Brothers.  She was also known as a writer for the autobiographical book Postcards From The Edge which was made into a movie released in 1990 .  Postcards From The Edge explored the drug problems and mental issues that she suffered. 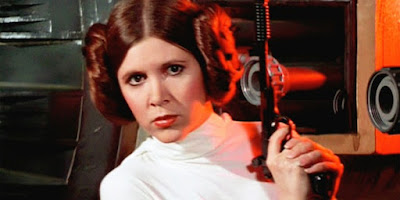 She is survived by her mother, Debbie Reynolds and her daughter Billie Lourd