Spider-Man And Marvel Back Together Again?

Back on May 13, 2014 Max Landis, son of director John Landis, Tweeted about Marvel getting Spider-Man back from Sony.  He tweeted the following :

"crazy about Marvel getting Spider-Man back, that's gonna be bonkers."

"...there's a chance I wasn't supposed to tweet that."


"Ha Ha 5 months from now this is all gonna be real intersting."

He deleted these Tweets a short time later.   It's all very "intersting" indeed. 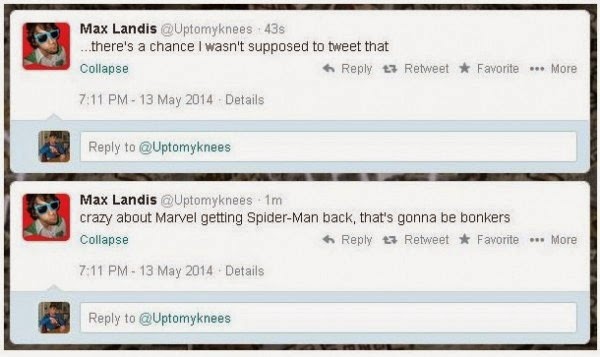 As if on cue, 5 months after Max's Tweets, more rumors appear.  Sony is allegedly "in discussions" with Marvel regarding the possibility of allowing Marvel to use Spider-Man in future Marvel films.  The Amazing Spider-Man 2 didn't do so well at the box office and one could speculate that Sony may be weighting their options for the future of the popular character.  At this point there is no official confirmation so it remains to be seen where Spider-Man will end up.

Death And Return Of Superman Pitch by Max Landis