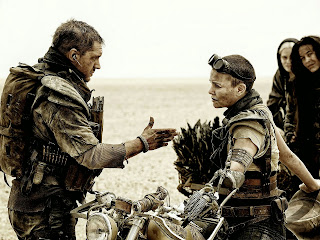 After a long hiatus to work on the very different films,  Lorenzo's Oil, Babe, Happy Feet, and others, George Miller has returned to Mad Max.   It has been nearly 30 years since the last Mad Max film and director George Miller is back to his film making roots in his most ambitious film to date.  He has said that he wanted to make a 2 hour chase film and has finally succeeded with Mad Max: Fury Road.  This is The Road Warrior elevated by an order of magnitude adding more of everything we have come to expect and love from the post apocalyptic genre that Miller helped to define.


The enemy is Immortan Joe, a powerful cult leader, who imposes his will on the dregs of society using water to maintain complete control.  He leads a society that is literally sick.  He and a group of lieutenants and henchmen lead a relentless chase to get back his most valuable treasure, healthy, fertile females, Immortan Joe's wives.  The environment has become so inhospitable that the bulk of survivors suffer from assorted cancers and illnesses that keep them weak and not long for the world.   His most loyal followers are a band of sickly "war boys" that follow his every commend. Their commitment is total.  They look forward to dying in battle as they expect to end up in Valhalla all shiny and chrome-like.  Analogies to terrorism are subtle but they are there, portrayed in a new and creative way.  If there is a message in the madness it is that one should never follow blindly and redemption is possible.  The film is full of creative action and destruction.  It takes everything that has come before and elevates it to a new level of absurdity and insanity.  This movie is the most expensive, dangerous, and dirty Mad Max of them all.  The visual effects are used to good effect to extend the environment and keep actors safe in what would otherwise be a veritable meat grinder.  It includes some of the best action that has ever been captured on film.  It's memorable and will likely require repeat viewing to absorb all of the densely packed, fast paced action.

Tom Hardy portrays Max Rockatansky.  He's a strong warrior of the wasteland, a survivor, a man who never quits.  Tom Hardy is a fine actor but he doesn't have quite the charisma of the Mel Gibson.  The Max of Mad Max 2: The Road Warrior was Mel Gibson in his prime.  He could single-handedly carry a film with barely a word of dialog.   Tom Hardy is his own Max, a feral survivor who lives by instinct.  He is merciless and committed to survival at all costs.

George Miller deserves a great deal of credit for managing to do what is becoming increasingly rare, surprising audiences with originality.  Fury Road is a rare kind of film that some may dismiss as just another summer action film but it is something more.  It manages to elevate the genre and captures much of what is great about the original films.  Some things are nearly impossible to recapture, the serendipity of low budget guerrilla film making.  The small happy accidents that aren't planned but become a big part of what moves good films up a notch to great.  George Miller has expressed his desire for sequels to this film.  It is an excellent setup for future adventures in the wasteland.   Everything is so amped up that it's hard to envision how writer and director George Miller will manage to top himself. 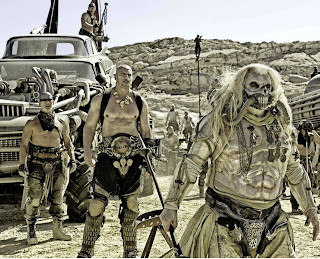 Some may find the relentless chase exhausting and its efficient use of exposition confusing.  This is in keeping with the traditional nature of the genre.  Mad Max: Fury Road lands squarely between Avengers and the upcoming Star Wars sequel, filling the apocalypse gap.  It is sure to find a legion of fans, some from the original Mad Max and others for whom this is their first introduction to Max.